The cold vapor method is only used for the determination of mercury. A reaction to produce the mercury is first carried out in a vessel external to the atomic absorption instrument.

Free mercury atoms can exist at room temperature and can be analysed using atomic absorption without employing flame and graphite furnace techniques at high temperatures.

Furthurmore, the vapor is monatomic and unreactive and can be taken up in a gas stream and be measured by atomic absorption as a cold vapor.

One of the most popular methods of Hg analysis is the conversion of Hg salts to Hg vapor by using a strong acidic reducing agent such as Tin (SnCl2) and HCl or NaBH4 and HCl :

Mercury is reduced in solution using stannous chloride or sodium borohydride in a closed system. The reaction quantitatively releases mercury (from the sample solution) and is carried by a stream of air, nitrogen or argon through a quartz absorption cell placed in the light path of an AA instrument for analysis.

The detection limit for mercury by this cold vapor technique is approximately 0.02 mg/L. 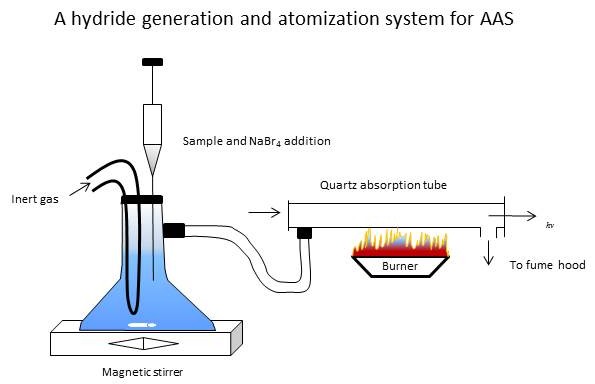 Hydride generation sampling systems are similar to cold vapor mercury systems, except that the hydrides generated must be heated in air/acetylene flame or electrically to create atoms in the free state.

Samples are diluted and acidified, then reduced with a hydride source such as sodium borohydride in an external system.

A volatile hydride containing the sample is generated and carried to an absorption cell in the light path of an AA spectrometer.


The following metals can be analysed by HGAAS.


The nebulizer required in AAS is not used in HGAAS. Continuous flow system or batch flow systems can be used.
Acid contents of samples and standards of 10% to 50% are common; this is much much higher than in normal AAS.

New Instruments
Simple manual systems as above are still used today, but modern CVASS instruments are automated and more sensitive, smaller, faster, and less expensive than the AA spectrophotometer with cold vapor attachments.

Today's CVASS systems can give detection limits in parts per trillion and analyze samples in just about one minute. They require very little operator interaction, and occupy a minimum of bench space.

Modern instruments can measure parts per million levels of Arsenic, Selenium, Antimony, Bismuth and Tellurium. Detection levels are in the range of 10ppt and 2ppt for Selenium.

With autosampling and computer controlled software, there is no need for external mixing of reagents, corrosive acids or or strong oxidizing and reducing agents.

Analysis of Selenium
The reaction of many metalloid oxyanions with sodium borohydride and HCl produces a volatile hydride: H2Te, H2Se, H3As, H3Sb, etc. The oxidation state of the metalloid is crucial and care must be taken to produce the specific metalloid oxidation state before the sample is introduced into the hydride generation system.

For example, HGAAS analysis of selenium requires the Se(IV) oxidation state (selenite). Se(VI), the more highly oxidized state of the element (selenate), responds erratically and non reproducibly in the system.

All selenium in Se calibration standards and samples must be in the Se(IV) form for analysis. Oxidize all Se in the sample to selenate using conc.nitric acid or hydrogen peroxide (decomposing the excess oxidant) and then reducing the contained selenate to selenite with boiling HCl.

After that reduction step, the final acid content is made up to the required content and is immediately introduced into the hydride generation module.

The sodium borohydride and hydrochloric acid reagents feed into the hydride generation reaction vessel must be optimized and may be different for different elements. Example concentrations are 0.35% NaBH4 and 50% HCl.