Intfrared spectroscopy deals with the infrared region of the Electromagnetic Spectrum. Only in this region is the energy intense enough to exite bonds in a molecule to absorb energy. Molecules absorb these frequencies of light because they correspond to frequencies of vibrations of bonds in the molecule.

Regions of the IR spectrum

4000 cm1  1300 cm1 Absorbance bands in this region can indicate what functional groups are present in an unknown compound.

1300 cm1  400 cm1 Absorbance bands in this region are unique to each molecule, like a fingerprint! Spectra are compared to known spectra.

The spectrophotometer detects this absorption and records it as a plot of transmission versus frequency.

Since each type of bond vibrates at a characteristic wavenumber , infrared spectroscopy has become a useful technique to identify functional groups in a molecule. The method involves the examination of the twisting, bending, rotating, vibrational motions of atoms and molecules.

This is a double beam scanning IR instrument that makes use of a diffraction grating in a monochromator to disperse the different wavelengths of light. 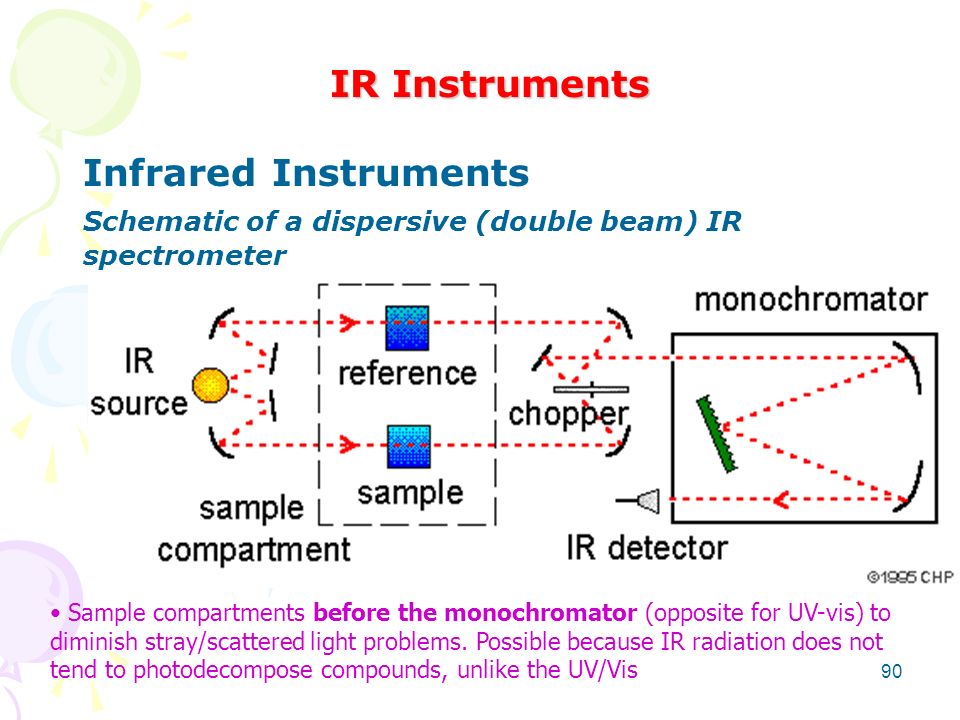 The key components are the light source, entrance slit, grating and detector. Radiation from the source is directed along both sample and reference and then into the diffraction grating. The grating disperses the light into spatially separated wavelengths which are selectively directed by a narrow slit towards the detector.

The wavelengths are measured one at a time, with the slit controlling the bandwidth. The grating and slit combination selects the wavelength being measured, and the detector produces a spectrum of a plot of transmittance against frequency.

The FTIR instrument relies upon interferences of various frequencies of light to produce a spectrum. It has a source, sample, two mirrors, a laser reference, and detector, but the assembly of components also include a beamsplitter and the two strategic mirrors that function as an interferometer. 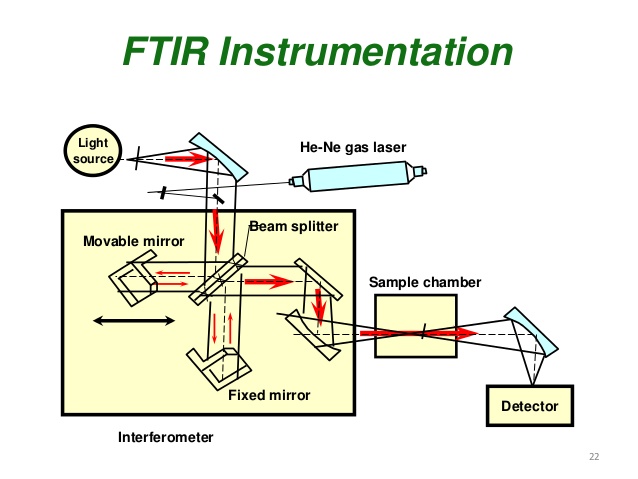 The recombined beam passes through the sample. The sample absorbs all the wavelengths characteristic of the its spectrum and then subtracts specific wavelengths from the interferogram. The detector now reports variation in energy-versus-time for all wavelengths simultaneously. A laser beam is superimposed to provide a reference for the operation of the instrument.

Components that make up the IR spectrophotometer


The radiation source is composed of an inert solid which is electrically heated to a temperature in the range 1500-2000 K. The heated material will then emit infra red radiation.

This is a cylinder (1-2 mm diameter, approximately 20 mm long) of rare earth oxides. Platinum wires are sealed to the ends, and a current passed through the cylinder. The Nernst glower can reach temperatures of 2200 K.

This is a silicon carbide rod (5mm diameter, 50mm long) which is electrically heated to about 1500 K. Water cooling of the electrical contacts is needed to prevent arcing. The spectral output is comparable with the Nernst glower, execept at short wavelengths (less than 5 m) where it's output becomes larger.

This is a tightly wound coil of nichrome wire, electrically heated to 1100 K. It produces a lower intensity of radiation than the Nernst or Globar sources, but has a longer working life.

This consist of a glass-filled enclosure with a diaphragm that expands on IR radiation and gives a change in signal due to the amount of movement of the diaphragm.

This is made from a single crystalline wafer of triglycerine sulphate sandwiched between two electrodes. When an electric field is applied and the field is removed, the polarization persists, it is temperature dependent and the semi-conductor acts as a capacitor. The incident infrared heating causes a change in the capacitance of the material.

The pyroelectric effect depends on the rate of change of the detector temperature and not on the temperature itself, which allows for faster response time.

Pyroelectric detectors are used in mid-infrared region, works at room temperature and applied in most FT-IR instruments..

Photoconductive detectors are thin-film semi-conductor devices which undergo a change in conductivity when exposed to varying quantities of infrared radiation. This change results in an increase in the amount of current flowing through the device, and the output of the detector is either a change in detector current or a change in voltage developed across a load resistor.

The incoming light produces free electrons which can carry electrical current so that the electrical conductivity of the detector material changes as a function of the incident light and a change in detector current. Example is the PbS and PbSe photoconductive detectors.

The mercury cadmium telluride detector comprise a film of semiconducting material deposited on a glass surface, sealed in an evacuated envelope. Absorption of IR promotes non-conducting valence electrons to a higher, conducting, state. The electrical resistance of the semiconductor decreases. These detectors have better response characteristics than pyroelectric detectors and are used in FT-IR instruments - particularly in combination with other instruments such as GC  FT-IR.